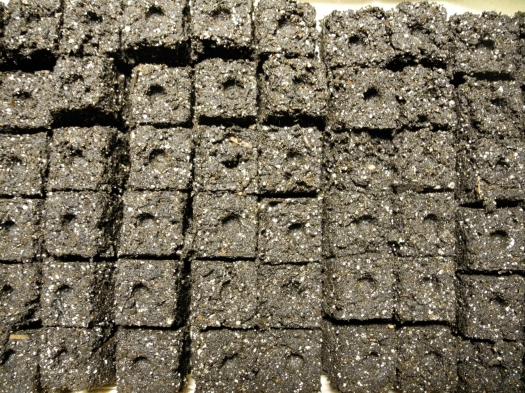 The amount of plastic in the world depresses me. Lately I’ve been trying to buy less of it, instead finding ways to re-purpose things I already have or find more durable, less toxic alternatives. I used to always buy those cheap plastic seedling trays, and though I had every intention of reusing them for as long as possible, they would inevitably crack right down the middle over the course of a few back and forth trips between home and the community garden.

I also used to use those little biodegradable peat pots for my seedlings, but I never really felt great about using those either. Much like how though using a paper grocery bag is theoretically a little better than using a plastic grocery bag, I think we can all agree that its really better not to use a disposable grocery bag at all. I think its really better to just not use the little disposable seedling containers, whether they be made of plastic or paper or peat. 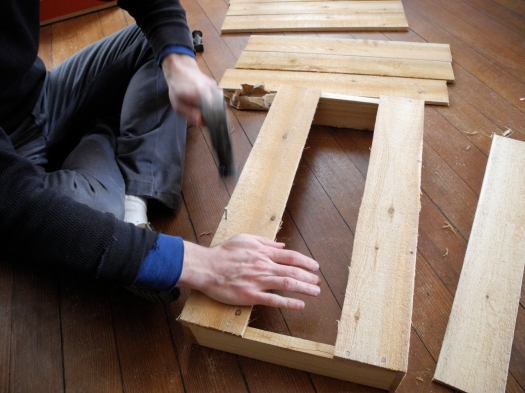 So this year I’m trying some alternatives. I ordered some cedar plant trays from Fedco. They are three for $18, a bit more expensive than the plastic ones, but not really that much more, considering how much longer they will last. They are a little rough (okay, very rough. Scott said they looked like they were made by a bear.)  And you have to assemble them yourself, but they take all of five minutes to nail together. They are very sturdy and since they are made of cedar I’m sure they will last a long, long time. 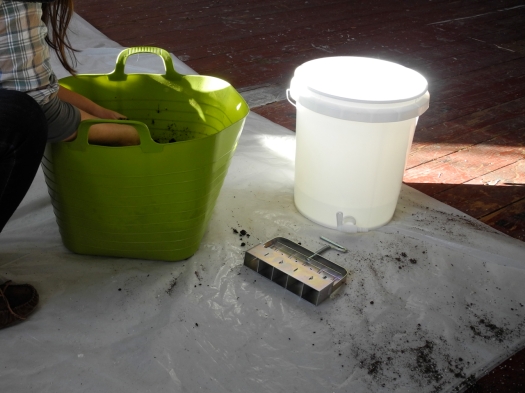 For Christmas Scott got me a soil blocker. A soil blocker is a mold that makes little cubes of potting soil that hold together on their own without a container. Not only do they eliminate the need for cell packs or peat pots, but they also make for healthier seedlings. Soil blockers come in a few different sizes and configurations. We decided on the one that makes five 1 1/2 inch blocks. 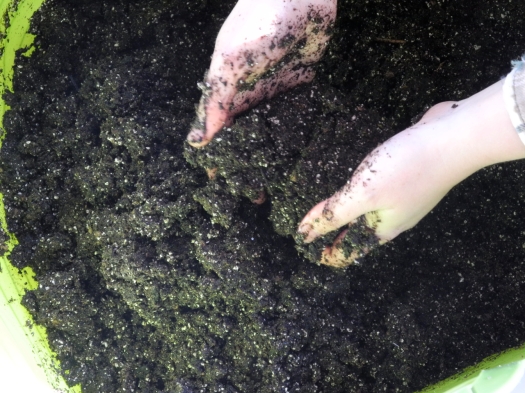 Yesterday we tried it out for the first time when we sowed our onion and leek seeds. The first step is making your seed starting mix. There a different recipes out there, and they typically include a combination of peat moss, vermiculite or pearlite, and compost. Some also include various fertilizers and minerals. Some people just use a packaged seed starting mix, and I also read somewhere that others just use straight compost. I decided to go with a packaged seed starting mix, which includes peat moss, pearlite, and lime, which I mixed with Coast of Maine lobster compost.

To make soil blocks that hold together well, you need to make a fairly wet mix, adding a lot more water than you would if you were using containers. It just takes a bit of trial and error to get the mix right. It’s a bit like making sand castles. If any of them don’t turn out right, you can always just dump them back into the bucket and try again.

We lined the trays with scraps of plastic sheeting (I know, plastic! But we already had it lying around, and you probably have some too.) since the trays have open slits in the bottom. If you’re starting your seeds in a greenhouse or some other place where you don’t mind water spilling, you can skip this. Our seedlings are going to live in the living room for a while so we want to try to keep the water contained. Then we cut pieces of an old blanket to fit in the bottom of each tray. This will act as a capillary mat, so that we can water the seedlings gently and evenly. With soil blocks you need to be a bit more careful with your watering to make sure the blocks don’t fall apart. Watering with a very fine spray would  work too.

We stamped the soil blocks directly into the trays, and we were able to fit about 60 to 70 blocks in each tray. We sowed all of our onion, leek, and shallot seeds, and set the trays out on the heat mat we rigged up last year.

If you’d like to learn more about soil blocks, I recommend this article by Eliot Coleman. It includes his recipe for soil mix and a lot of other helpful information. Anyone else out there using soil blocks? If so let me know if you have any good tips!