There’s not a whole lot to do in the garden these days, besides waiting for the tomatoes and peppers to finish ripening up. This is a blessing, since this means more time to spend  in the kitchen, putting up the harvest. I have a huge pile of chard and kale that I’ll blanch and freeze today, and the canning jars are filling up. I have another pickle recipe to share with you (not cucumbers this time!) but first I want to talk about tomatoes.

Yesterday we broke in my new Victorio food strainer. This thing is pretty awesome. You put whole tomatoes in the hopper, turn the crank, and it spits tomato puree out one spout, and the seeds and skins out another. I like to can both whole peeled tomatoes and crushed tomatoes. We peeled and canned the larger tomatoes whole (or in big chunks) but I had a lot of tiny tomatoes that would have been a lot of work to peel, so we crushed those ones. 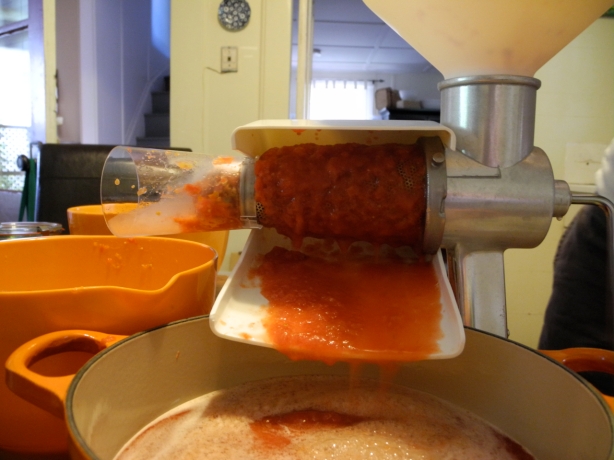 The tomato mill worked great, and we ended up with 2 1/2 quarts of puree and probably less than a cup of seeds and skins for the compost bin. The canning part didn’t go so well. For the first few years I canned tomatoes I hot packed them and canned them in a water bath canner. I don’t think I ever had a jar that failed to seal. Then last year I got a pressure canner, and for some reason I also decided to switch to raw packing the tomatoes. That’s when the trouble began. Each time I’ve canned tomatoes since making the switch, I’ve had trouble with tomato pulp bubbling up out of the jars. Last year I had a couple jars that failed to seal right off the bat, and I froze those ones. Then I had one or two jars where the seals failed after a few weeks. When I did this year’s first batch a few weeks ago, some pulp bubbled out, but they all still sealed and so far the seals are holding. Yesterday’s batch seems like the worst yet. They are all sealed now, but so much pulp bubbled out that I have my doubts that the seals are really going to hold.

I’ve read a lot about siphoning, which is when rapid changes in pressure or temperature causes some of the liquid to get sucked out of the jars. But I don’t quite think that is what’s happening here. I think that the contents of the jars are boiling so furiously that they are boiling over. I’m not sure if it’s the pressure canning or the raw packing that’s making the difference, or maybe its a combination of the two. But my gut feeling is that the raw packing is the main problem. I’m not sure why I decide to make this switch, it might have been because it seemed easier, or maybe it was because more of the recipes I was seeing were for raw pack. I know I’ll be doing at least one or two more batches this year, so I think next time I’ll go back to hot packing and see how that works in the pressure canner. In the mean time I’m trying to decide what to do with yesterday’s batch. If they come unsealed a week from now, I’m going to be pretty bummed out. I really don’t have the space to freeze them all, so I’m considering popping the lids off and processing them again with new lids. Do any of the more experienced canners out there have any thoughts about all this?