When I was in California last month, I had the most delicious breakfast I’ve ever eaten at Brown Sugar Kitchen in Oakland. We ordered a buttermilk biscuit to share while we waited for our meal (we should have each ordered our own), and on the table there was a pot of sour cherry jam to eat with it. After we’d polished off the last crumbs of the biscuit, I contemplated eating the jam right out of the pot with a spoon. That morning I vowed to finally get my hands on some sour cherries this year and make some jam. Sour cherries have a very short season and are far more fragile than the sweet ones, so unless you have your own sour cherry tree, you really have to be on top of things to get your hands on some. I’m usually not that on top of things. 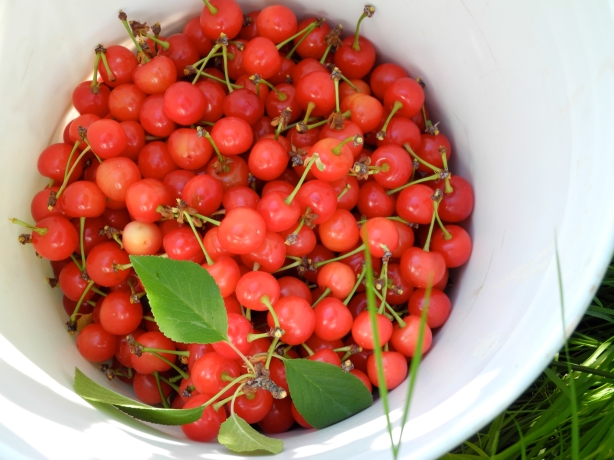 As far as I know there is only one orchard around here with sour cherry trees, and for the past few weeks I’ve been checking their website daily for an indication of when they would be open for picking. Friday was the first day. I’ve heard stories of sour cherry trees being picked clean within a day or two, so I got in the car first thing Saturday morning and headed to the orchard. I arrived at 9:30, and there was Russian family picking already. They were clearly on a mission. We picked side by side for a while, and I wondered about what kinds of delicious things they were going to make with all those cherries. By the time they had finished, they had picked at least 40 pounds of cherries, and 4 of the 6  or so trees were just about picked clean. The mother wished me good luck and we all laughed and they headed back down to the barn with four nearly overflowing buckets. I kept picking a little while longer, and just as I decided to call it quits a Polish father and son arrived looking just as determined as the other family. I’m sure the orchard must have been picked clean by noon. I’m glad I got there when I did!

Saturday afternoon I made a pie, I think the first sour cherry pie I’ve ever had in my life. Then this morning I made a batch of jam. I picked just under 7 pounds of fruit, and now I’m wishing I’d picked a few more pounds!

I started out pitting the cherries with a cherry pitter, but I soon realized that if I squeezed the cherry while pulling the stem, the pit would usually pop right out. The cherries get pretty mangled doing it this way, but its much faster and you want to beak up the cherries anyway. Combine the cherries and lemon juice in a large, heavy pot. Use your hands to crush the cherries. Stir in the sugar. Place the crushed cherry pits in a tea ball or spice bag and add it to the pot.

Place a small plate or saucer in the freezer. (You’ll need it later to test the jam.) Bring cherries to a boil over medium-high heat. Cook, stirring frequently, until the juices are thick and syrupy. Test to see if the jam is ready by spooning a small puddle of jam onto a cold saucer. Put it back in the freezer for a minute and then take it out and push the puddle of jam with your finger. If it wrinkles up, the jam is ready. If its still syrupy, keep boiling and test again in a few minutes. It should take between 20 and 40 minutes of boiling to reach the right consistency, or even as long as an hour. A lot depends on how much water is in the fruit, and the shape of your pot. It will cook down much faster in a nice wide pot. When the jam is done, remove from heat, and fish out the bundle of pits. Let the jam settle down just a bit, and give it a good stir to make sure the cherry bits are evenly distributed. Ladle into clean, hot half-pint  jars leaving 1/4 inch headspace. Process 10 minutes in a water bath canner.

*Inside the pit is a small kernel, which has a bitter almond flavor (this is also true of apricots and other stone fruits, and it is where almond extract comes from.) They give the jam a very subtle almond flavor. They won’t make the jam taste like marzipan, I promise.

These kernels can be toxic in large doses, but small amounts are frequently used as a flavoring in foods made from stone fruits. In The Joy of Jams, Jellies, and other Sweet Preserves, Linda Ziedrich recommends blanching the kernels in boiling water for 20 minutes, which will remove the toxins. A lot of people don’t bother with this step though, since the small amount you are using probably isn’t enough to make you sick. To crush the pits, wrap them in a dish towel and pound them with a hammer to crack them open. You can pick out the kernels if you want, but it’s easier to just toss the kernels in the tea ball along with the crushed shells. 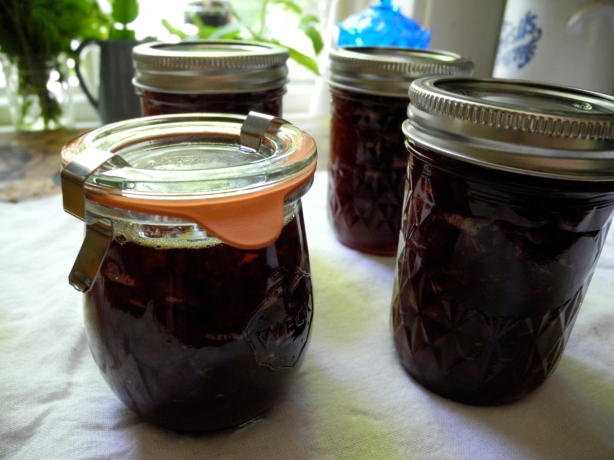