The weather was chilly and grey today, and after a quick stop at the garden to check on things after work, I wanted soup. The first local asparagus turned up the co-op last week, and I had a bunch of it waiting at home in the fridge. This soup is very simple and barely takes half an hour to make, but it tastes like something very fancy. I want to eat it every day until the peas come in, and then I want to eat this soup with peas in place of the asparagus.

I picked up a couple of new books over the weekend, and spent the better part of Sunday reading An Everlasting Meal: Cooking with Economy and Grace by Tamar Adler. I think there’s a little bit of the book in this soup. 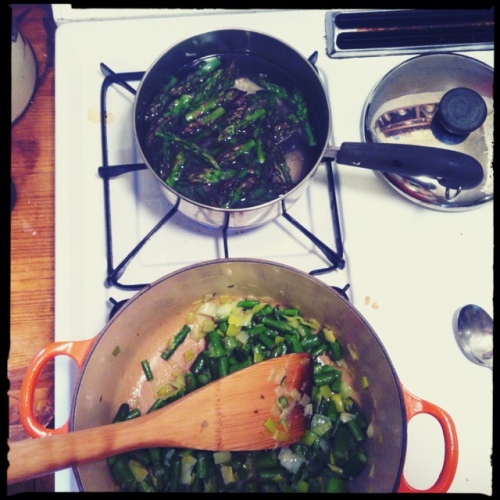 This recipe makes a very small pot of soup. You’ll probably want to double it if you’re feeding more than one or two.

Bring a small saucepan of water to a boil. Generously salt the water and add the asparagus tips. Cook until very tender, about 3 minutes. Transfer the asparagus tips to a bowl with a slotted spoon, reserving the cooking water. Meanwhile, melt the butter in a pot over medium heat, then add the chopped asparagus stalks and leeks. Season with salt and pepper and cook, stirring frequently, until the vegetables begin to soften. Don’t let them brown.

Once the vegetables are softened, add enough of the reserved cooking water to just barely cover the vegetables. If you have extra cooking water, save it in case you need to thin the soup later. Simmer until the asparagus is very soft about 10 to 15 minutes. Remove from heat and purée the soup until very smooth. Return to low heat and stir in a little cream. If its too thick, add a little more of the cooking water until you like the consistency. Add the asparagus tips and season to taste with salt and pepper.

One thought on “Simple Cream of Asparagus Soup”