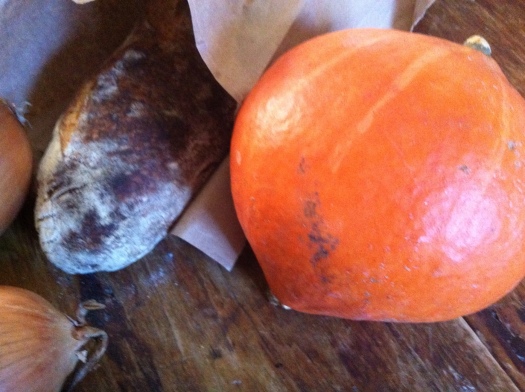 Each chapter of Nigel Slater’s Tender is devoted to a single vegetable, and includes a discussion of how he grows said vegetable his own garden, followed by a handful delicious sounding recipes. Before he gets down to specifics he offers a paragraph or two of suggestions for how to prepare the vegetable and what to pair it with, little sketches of traditional recipes and cooking methods. When I first read “A Pumpkin in the Kitchen” last June, I was ready forgo tomatoes and corn and watermelon and skip right to November so that I could make this:

The French have an ancient soup-stew whose frugality ensures it falls under the modern label of “peasant cooking.” They toast thick slices of bread, layer them with fried onions, garlic, and marjoram; blanched and skinned tomatoes; and thin slices of pumpkin. The dish is then topped up with water and olive oil and baked in a low oven for an hour or two. The lid is lifted for the last half hour to allow the soup to from a crust. They call it garbure catalane, with a nod to its Spanish origins.

Last Sunday I remembered the kuri pumpkin I had squirreled away in the basement, the chicken stock I made with last week’s roast chicken, and the jars of tomatoes I put up last summer, and I decided it was time to make it. It was every bit as delicious as I hoped it would be. It’s a nice change from your typical puréed pumpkin soup, which I think can be a bit like eating baby food. I like how the onions and tomatoes and pumpkin slices each retain their own distinct identities. 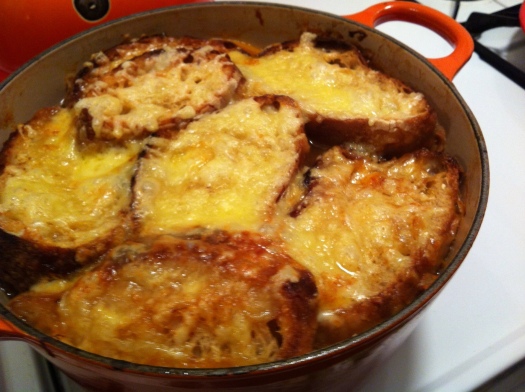 Bread and Pumpkin Soup
Adapted from Tender by Nigel Slater
olive oil
salt & pepper
2 large onions, thinly sliced
3 or 4 cloves of garlic, sliced
1 kuri pumpkin (or other winter squash), peeled and thinly sliced
1 pint (or 15oz. can) whole or diced tomatoes
1 quart chicken or vegetable stock
Thick slices of good French bread, toasted (enough to make one layer in your pot)
About a cup of shredded gruyere cheese (cheddar would be good too)

Preheat oven to 350 degrees. Heat a couple tablespoons or so of olive oil in a dutch oven on top of the stove. Add the onions and garlic and some salt and pepper and cook over medium heat, stirring frequently, until soft and lightly browned. Add the pumpkin, tomatoes, and stock. The liquid should just about cover the vegetables. If it doesn’t, add a little water to that the liquid comes up to the top of the vegetables. Arrange the bread slices in a layer on top. Cover the pot and stick it in the oven for about an hour and a half. Then remove the lid, sprinkle the cheese over the bread and bake for another half hour, until the cheese is nice and brown and melty and the pumpkin slices are soft.

3 thoughts on “Bread and Pumpkin Soup”